Maps change. Cities come and go, and places receive new names. To help locate the Early Byzantine sites that are discussed, a few notes and current Google maps are offered below.

When Alexander the Great subdued Egypt in 331 B.C., he expanded a Mediterranean settlement and named it after himself: Alexandria. Other Egyptian cities and temple districts received Greek names, and new Hellenistic cities were established. Many of these cities retained their Greek names even after the Roman occupation (30 B.C.) and in the Early Byzantine Era (A.D. 300 - 700). When Arabs subdued Egypt in the 7th century, they again gave new names to many places. These Arabic names are still used today.

The Egyptian city worshipped the goddess Hathor. After Alexander, it came to be known as the City of Aphrodite (Aphroditopolis Ἀφροδίτης πόλις), because Hathor was associated by the Greeks with their goddess of love. In Latin it was called Veneris Oppidum. After it lost its status as a city, it was called the Village of Aphrodite or simply Aphrodite (Ἀφροδίτης κώμη or Ἀφροδίτη). Αnd after the Arab conquest it was called Aphrodito.

In 1902, the archaeologist Quibell called the village built above the ancient site Kom Ishgau, and during the 20th century various spellings appeared in scholarly works: including Kom Ishgaw (MacCoull), Kom Ishqâw (Kuehn), etc. At the end of the 20th and the beginning of the 21st centuries, the local inhabitants and Google maps used the name Kom Ashkaw. After the revolution of 2011, the name was revised to Kom Ishqaw, and the name Kawm al Hamid was added to the site.

View Larger Map
_Kom Ishqaw = Kom Ashkaw = Aphrodito
To see into the streets of Kom Ishqaw (Ashkaw ) from above,
click on the tiny square to change from the Map view to a Satellite or Earth view
and click on the + tab repeatedly. Or click the blue View Larger Map﻿ tab
or the View on Google Maps box for more options. 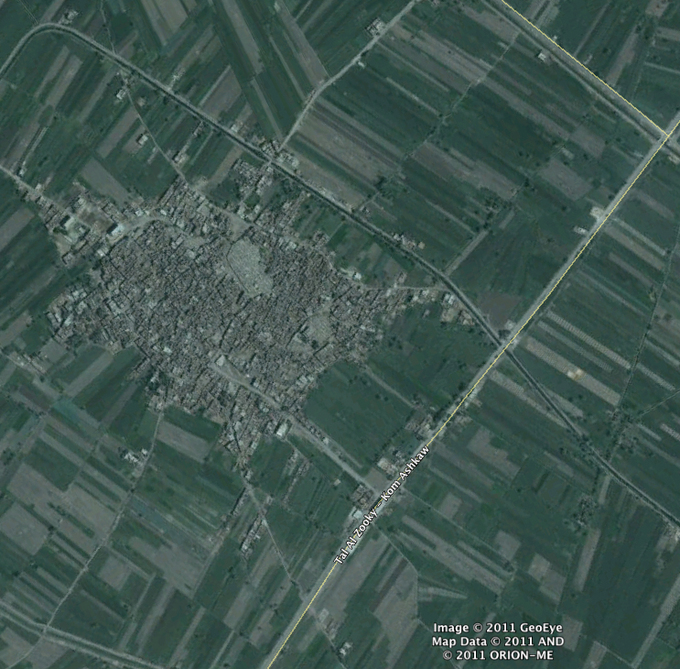 The Roman emperor Hadrian built the city Antinoöpolis (also called Antinopolis and Antinoë) on the east bank of the Nile River. The city, decorated in an elaborate Hellenistic style, commemorated his friend Antinous, who had drowned there in A.D. 130. (The Egyptian pharaoh Ramesses II had already built an Egyptian temple on the site.) The city was abandoned after the Arab conquest.

When General Napoleon Bonaparte visited c. 1800, many of the ancient ruins were still intact, and the village of Cheykh Abadah was situated on the river bank. Modern archaeologists called the village Sheikh Ibada and the nearby ravine Wadi Ibada (or Sheikh Abada and Wadi Abada). Today Google Maps identifies it as El-Shaikh Ebada across the river from El-Rawda (Roda).

View Larger Map
El-Shaikh Ebada = Sheikh Ibada = Sheikh Abada (beside Wadi Abada)
To see into the streets of El-Shaikh Ebada (Sheikh Abada) from above,
click on the tiny square to change from the Map view to a Satellite or Earth view
and click on the + tab repeatedly. Or click the blue ﻿View Larger Map﻿ tab
or the View on Google Maps box for more options. 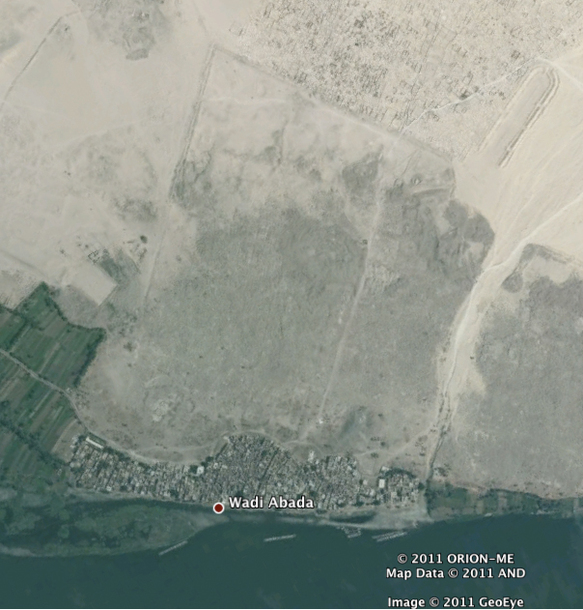